Initial Management of a Baby with Atypical or Ambiguous Genitalia
Background

This guideline is intended for medical staff managing a baby with ambiguous or atypical genitalia and incorporates recently published national and international standards, guidance and consensus (1-5). There is a separate PIER guideline for boys with undescended testes (urology).
Scope

The aim of the guideline is to improve patient experience, clinical outcomes, provide an agreed clinical approach to managing these babies and families, enable prompt institution of relevant investigations, optimise communication with parents and facilitate equity of access to specialist services.
Definitions

To avoid misunderstanding or inadvertent assumptions about interpretation of clinical findings, the language used with parents and between health professionals should be sensitive, respectful and chosen carefully (1,2). In this clinical situation the meanings of the words “sex” and “gender” are not interchangeable (2).

Ambiguous genitalia: This is a form of DSD (see below) and refers to a minority of babies where it is not possible to assign sex based on the clinical examination.

Atypical genitalia: genitalia that are different to the normal spectrum in males and females but where male or female sex can usually be assigned with a reasonable degree of certainty. An example would be a minor degree of hypospadias in a baby boy with descended testes.

Differences of sex development (DSD): Congenital conditions in which chromosomal, gonadal or anatomical sex has been compromised, usually owing to a genetic mutation. Use of the term ‘disorder’ is controversial in the context of naturally occurring variations.

Gender: The psychological experience of being male, female, both or neither (typically used regarding social and/or cultural differences rather than biological ones). For the purpose of this guideline, therefore, it is not possible to know the gender of a baby.

Gender identity: The core sense of the gendered self as male, female or other.

Sex: The state of being male or female (typically used regarding biological differences that include sex chromosomes, gonads and internal and/or external reproductive structures).

Sexual orientation: The direction of sexual attractions to males, females, both or neither
Initial Management

​​    ​
Important Points to Guide the History

Enquire about:
Important Points to Guide the Examination

Labioscrotal fusion, genital tubercle length, urethral meatus and position of each gonad are scored individually then added together to provide a score out of 12.

In males, please measure the genital tubercle by finding the base of the corpus cavernosum at the  pubic symphysis and measuring to the tip of the glans (not including any foreskin). It should be a stretched measurement.

In females, please measure the genital tubercle from the junction of the labia majora to the tip (excluding the clitoral hood)

The following table is relevant for babies of all gestation

As a guide these are the 10th centile measurements of male genital tubercle length at various gestations. Any measurements below these values would warrant completing a full external genitalia score, then deciding if further endocrine investigations were required. Undescended testes may also be a normal finding in prematurity. 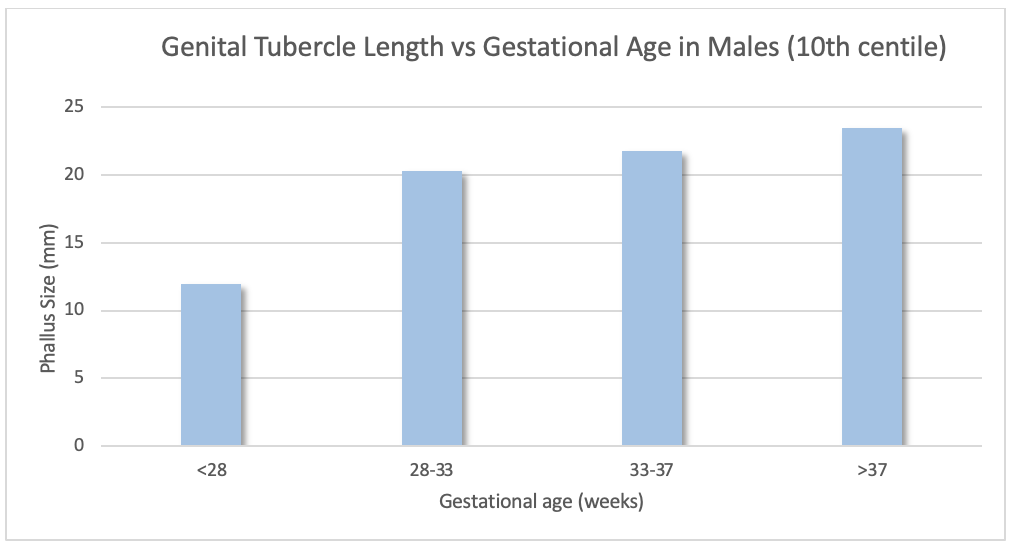 The female genital tubercle (clitoris) does not increase in size from 24 weeks of age. Therefore, any size over 6.5mm (95th centile), at any gestation, requires further investigation (8)
Liaison with the DSD Multidisciplinary Team in Southampton

The baby needs to be monitored as an inpatient for: This monitoring should continue until the following investigations have been completed.

A baby with atypical or ambiguous genitalia is potentially at risk of adrenal insufficiency. Therefore 6-12 hourly electrolytes, BP and glucose should be undertaken until the results of remaining investigations have been obtained.

​The guideline will be displayed on the PIER website and can be accessed by all healthcare professionals working within Wessex. This guideline will be disseminated to network centre leads within the Wessex Paediatric Endocrine Network.
Process for Monitoring Effectiveness

Compliance with the guideline will be audited and results disseminated to the Wessex Paediatric Endocrine Network. A service evaluation of parental satisfaction of initial management will be undertaken.
References